While the number of photovoltaic (PV) facilities continues to grow, the imbalance between the supply and demand of solar power grids has become a major constraint. Sufficient solar energy can be obtained during the day, but the demand is not high. This means that users will pay a higher price per watt in the morning and evening during peak usage hours.

Energy storage systems (ESS) for solar energy equipment in residential, commercial, and public utilities use inverters to store electricity or the grid during the day when demand is lowest, and store them when demand is high to release the energy that has been generated. Adding ESS to the solar grid-connected system allows users to save the cost of using a technique called "peak shaving".

Traditional photovoltaic equipment is composed of unidirectional DC/AC and DC/DC power stages, but the unidirectional conversion method is the main obstacle to the inclusion of ESS. More components, modules, and subsystems are required, all of which significantly increase the cost of adding ESS to existing solar installations. 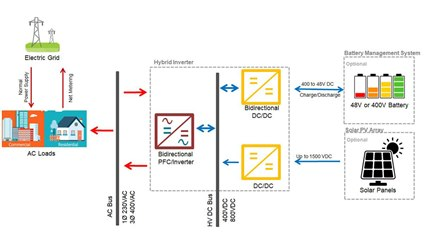 Hybrid inverters can effectively improve the efficiency of the conversion stage, but this efficiency improvement is more important for ESS-equipped micro-grids that perform multiple power conversions. The power converter system manages the DC/DC conversion to charge and discharge the battery. It also manages DC/AC and AC/DC conversion, converting the direct current stored in the battery into alternating current for flowing into and out of the grid.

In a micro-grid system with a battery, the main function of the battery is to store photovoltaic energy and supply power to the grid on demand. The unit storage capacity of lithium-ion battery packs is significantly higher than that of lead-acid batteries.

While 400V battery packs are becoming more and more popular in the electric vehicle (EV) field, solar power grid equipment is also increasing the battery pack voltage from 48V. But how to manage the power conversion of a 400V battery pack?

In addition to the microcomputer with system control and communication functions that incorporates the ESS into a larger system, the low-loss and high-efficiency power switch also improves the safety and reliability of the energy storage system. Compact power switches and real-time microcomputers based on silicon carbide (SiC) and gallium nitride (GaN) materials allow the bidirectional converter to be modified to accommodate various DC energy storage units. See Figure 2. 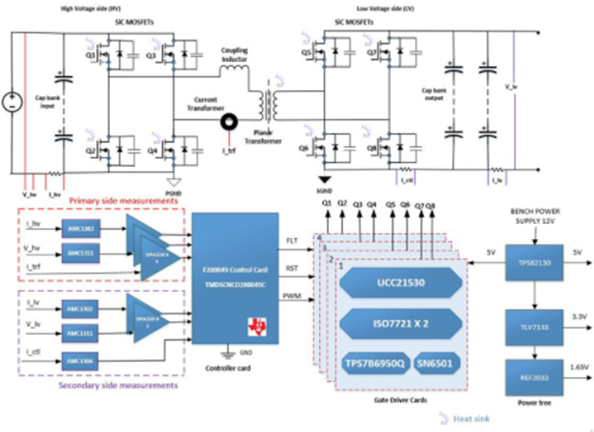 In order to build an intelligent wall-mounted storage system, it is necessary to design an inverter that uses minimal natural convection cooling to optimize heat dissipation. The distributed power architecture allows heat to be concentrated and distributed throughout the system. This architecture ensures that the required energy storage inverter can handle high current levels at different voltages and reliably respond to fast-changing load transients.

Such systems require gate drivers that support high-speed switching at switching frequencies from 100kHz to 400kHz and provide protection. If the switching speed is not fast enough, you will find that the efficiency of the power conversion stage is significantly lower.

The gate driver converts the digital PWM signal of the controller into the current required by the SiC or GaN field effect transistor (FET). The PWM-based controller allows accurate sampling of voltage and current in multiple power conversion stages.

The power supply design of high-frequency switching faces the challenge of accurate current and voltage sensing. Current measurement with a shunt not only improves accuracy, but also speeds up the reaction time, allowing you to quickly react to any changes in the grid, so you can close the system connection when the grid is short-circuited or disconnected. Increase.

Current measurement is essential for inverter-centric design, because the control algorithm requires current sensing for control. Some design solutions can be used to perform isolated current measurements using amplifiers/modulators and power supplies isolated from external shunts.

The power converter needs to measure the current in the grid to see if the current is in phase with the voltage. By measuring current and voltage, in addition to controlling the charging current of the battery, it also controls the operation of the inverter and the overload protection function.

Increasing the battery voltage and expanding the voltage range are important issues for solar inverters compatible with energy storage. With built-in gate drivers and protective microcomputer control and wide band gap semiconductors and other basic components, in addition to the need for high efficiency and natural convection, these higher and wider battery voltages can be supported.